We're delighted to be exhibiting a solo show from Janis Goodman "Regeneration" and launching the accompanying book. It illustrates much of her latest work and looks at themes that run throughout. Signed copies available from November 1st 2018

The show is also accompanied by a small selection of paintings "The Romantic Ruin" from Ian Scott Massie. 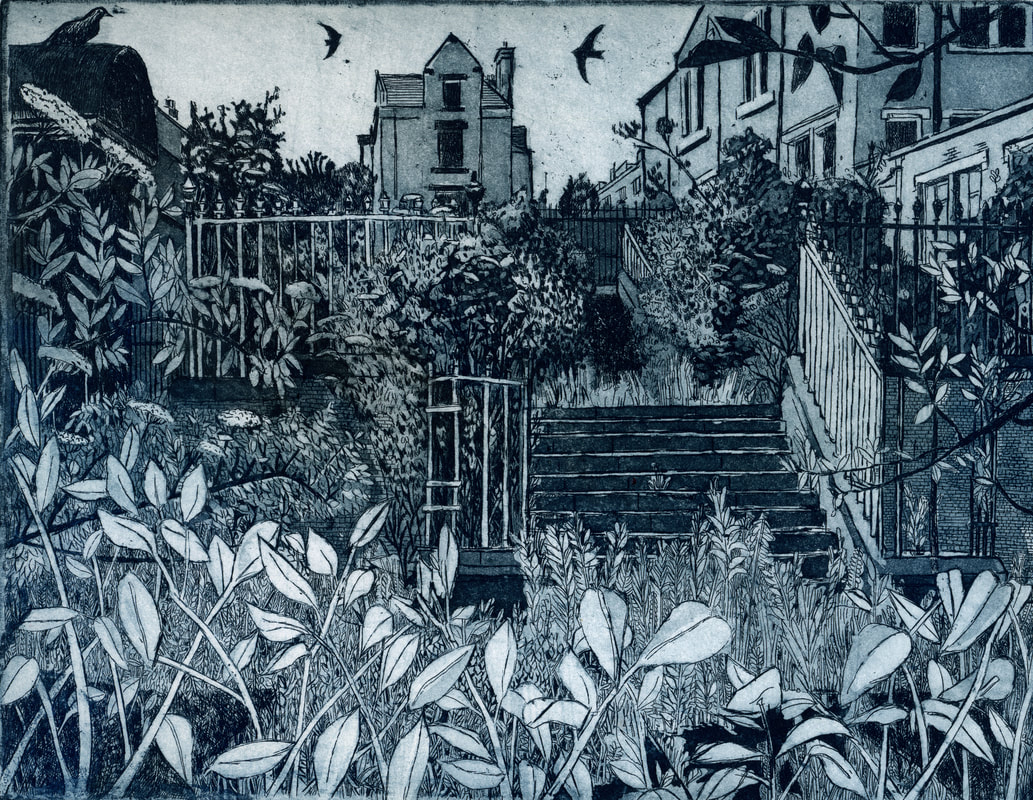 Regeneration - Framed £140 (unframed £99)
"Urban versus nature
I am always interested in the relationship between the artificial and the natural; the manmade environment and the anarchic energy of nature and entropy. I like the way nature takes back the world, given a crack in the ground or a wall. The print called “Regeneration”, contains a paradoxical narrative - the etching shows a neglected Victorian school building which was being overwhelmed by plants: buddleia, birch saplings and willow herb. However when the building itself was regenerated, the plants disappeared completely and the verdant playground became a car park. In prints such as Dog Days and Land Marks the plants seem to be winning, using the buildings as a structure on which they can grow. Accommodation shows how nature has to adapt to the man made as the trees lean backwards in order to gain more light. In Wild in the City I imagine the surveillance cameras serving as supports for climbing plants as the scavenging birds and animals survive and even thrive on our detritus.  Even in the middle of the city, there are skeins of geese or flocks of starlings, living off the urban land, seen in prints such as:  Leeds Flyover, Elevations and Looping the Loop. I also enjoy how the man-made can frame the natural world, making us see it afresh. in both Hackfall Triptych and Tree Lines the architecture  reflects and enhances the tree shapes."
Extract from the book Regeneration  - Janis Goodman 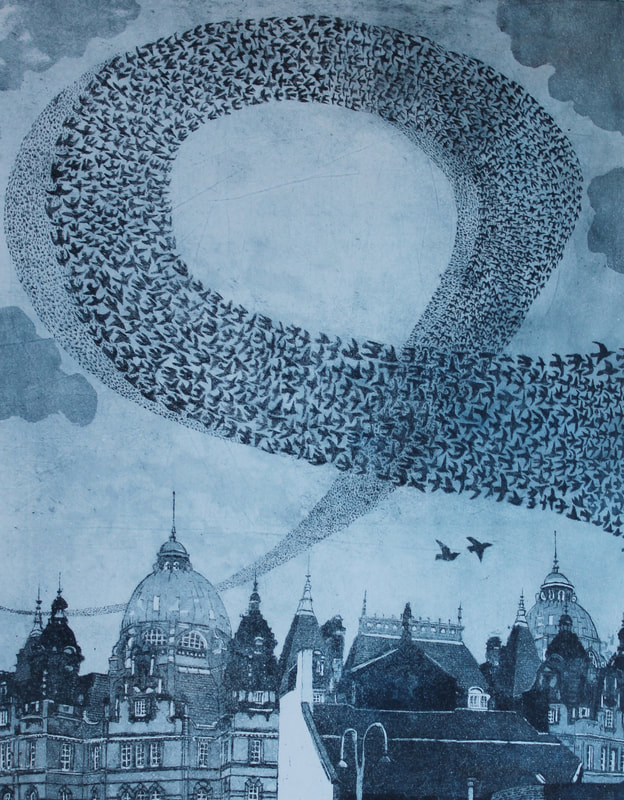 A second form of regeneration in my prints, can be found through the pictures of birds. While I understand how precariously fragile their existence can be, my work focuses on the importance and vitality of their presence. They animate the world in a way which is essential to human life and pleasure. My Bird on the Press etching was the result of a bird getting trapped in my house, but a visitor , knowing how often I depict birds, thought that the bird was tame, almost a printmaker’s familiar. Sparrows have always been a totemic bird for me. When very young I found great comfort in the hymn which described God as “Seeing the meanest sparrow fall, unnoticed in the street”. I was only eight when I decided that this merely served as a device to make people feel better but I can still recall how much I cared about that sparrow. It is portrayed in my etching Unnoticed. My small inner city garden provides cover for small flocks of sparrows and is the basis for several of my prints: Looking Up, Fledged, Sparrow and The Ubiquity of Sparrows. Ubiquity was the collective noun for sparrows simply because they used to be so numerous and were to be found everywhere.
Starlings are another bird species which used to be found in huge numbers and are now sadly reduced. There is a paradoxical tension between the great interest in these birds’ murmurations (when a flock moves in complex, geometric sequences) and the attempt to make buildings hostile environments by installing bird spikes, wire and other devices to deter them. The return of migratory birds such as swifts - Happy Returns and Ring Around the Moon, is a huge relief to many people, as Ted Hughes says in his poem Swifts, “They’ve made it again, Which means  the globe is still working”."
Extract from the book Regeneration  - Janis Goodman

The third way in which themes of regeneration appear in my work, is in relation to greenhouses. I have always been fascinated by greenhouses - the smell and the warmth of them and the feeling of repetitive human endeavour which makes seeds and cuttings grow. I love the patterns  made by trays  of seedlings and also the places where the patterns are broken. Propagation is a study of the greenhouse of a large  county estate. In Illuminated a dilapidated greenhouse, on an allotment is lit up by low sunshine but the light conveys some of its former purpose, hiding its dereliction. In my most recent print, Cosmos In The Greenhouse I explore the tension between the orderly nature of the architecture of a huge industrial sized greenhouse and the wild anarchic energy of the cosmos. I also enjoy the ambiguity of the word cosmos, it is both the name of the plant and of our observable universe."
Extract from the book Regeneration  - Janis Goodman