27th August - 2nd October 2016
Artists express some of their favourite poems through their work. Bellow are some examples of what the exhibition has to offer....
Jane Burnley
​When I was invited to take part in this exhibition, I was really pleased as I love poetry but had never painted with this subject in mind.  I have chosen three poets; I love John O' Donohue's work, a philosopher, poet and writer interested in the Celtic world.  Mary Oliver's work is inspirational too, as she writes about the wonder of the natural world in a simple, spiritual and very moving way. I discovered Sasha Morsom and her beautiful poem during this project.

John O' Donohue writes " poetry is the language of silence"; this defines it perfectly for me, a few carefully chosen words surrounded by space and stillness. A lot of my paintings have a feeling of silence and stillness.

I tend to work very intuitively in acrylics, producing generally small, abstract landscapes, using a sgraffito technique, so scratching through to oil pastel underneath. I love the effect this can give, but it is also a very therapeutic physical process! Colour is paramount to me and each time I paint with colours that 'need to come out' that day, so some days it may be subtle pale greys and other times it might be strong, bright intense colours.  I don't plan my work, but allow it grow. With regards to this exhibition, it is usually the feeling of the poem, or one line of it that I have painted rather than an exact literal depiction of the whole piece; an expression of it rather than an illustration of it. 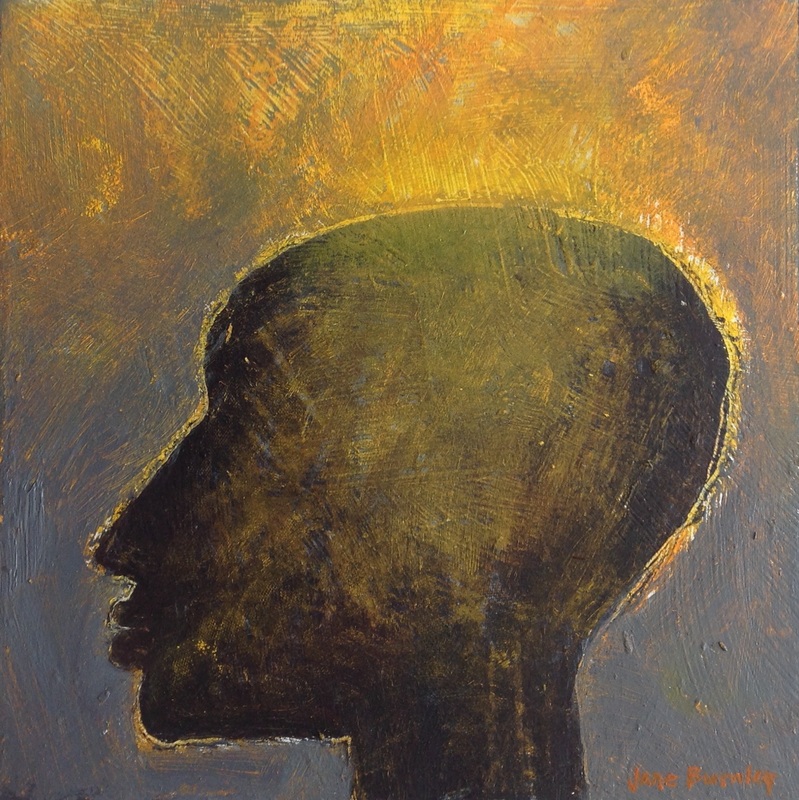 Sue Brown
Stunning etched and enamelled work, Sue says: "My inspiration is My Crow by Raymond Carver:-
​
My Crow
A crow flew into the tree outside my window.
It was not Ted Hughes’s crow, or Galway’s crow.
Or Frost’s, Pasternak’s, or Lorca’s crow.
Or one of Homer’s crows, stuffed with gore,
after the battle. This was just a crow.
That never fit in anywhere in its life,
or did anything worth mentioning.
It sat there on the branch for a few minutes.
Then picked up and flew beautifully
out of my life.
​
I just love the imagery and the fact that we see birds around us and they are just ordinary, just there really" 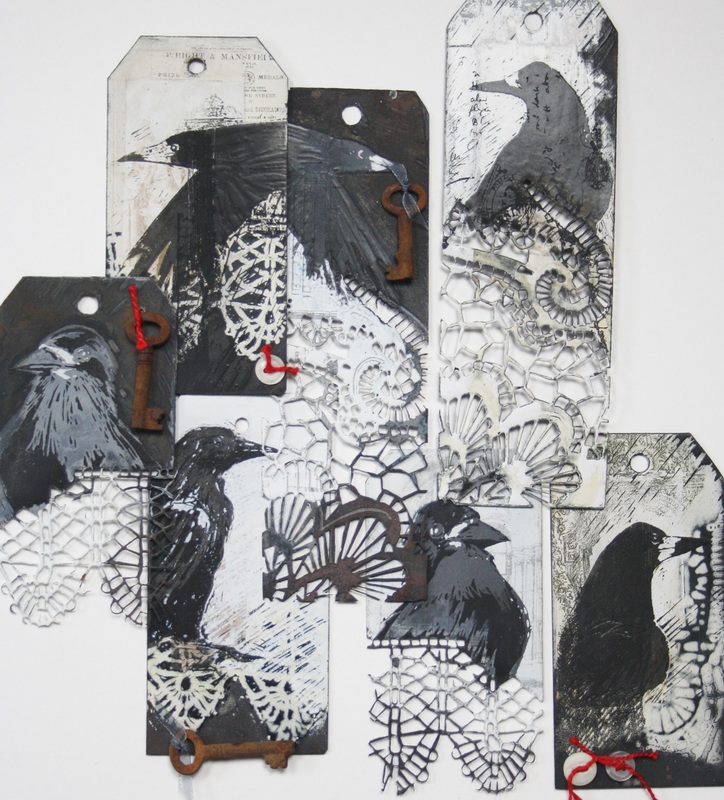 ​‘Cargoes’
Quinquireme of Nineveh from distant Ophir,
Rowing home to haven in sunny Palestine,
With a cargo of ivory,
And apes and peacocks,
Sandalwood, cedarwood, and sweet white wine.

Stately Spanish galleon coming from the Isthmus,
Dipping through the Tropics by the palm-green shores,
With a cargo of diamonds,
Emeralds, amethysts,
Topazes, and cinnamon, and gold moidores.

Dirty British coaster with a salt-caked smoke stack,
Butting through the Channel in the mad March days,
With a cargo of Tyne-coal,
Road-rails, iron-ware, and cheap tin trays. 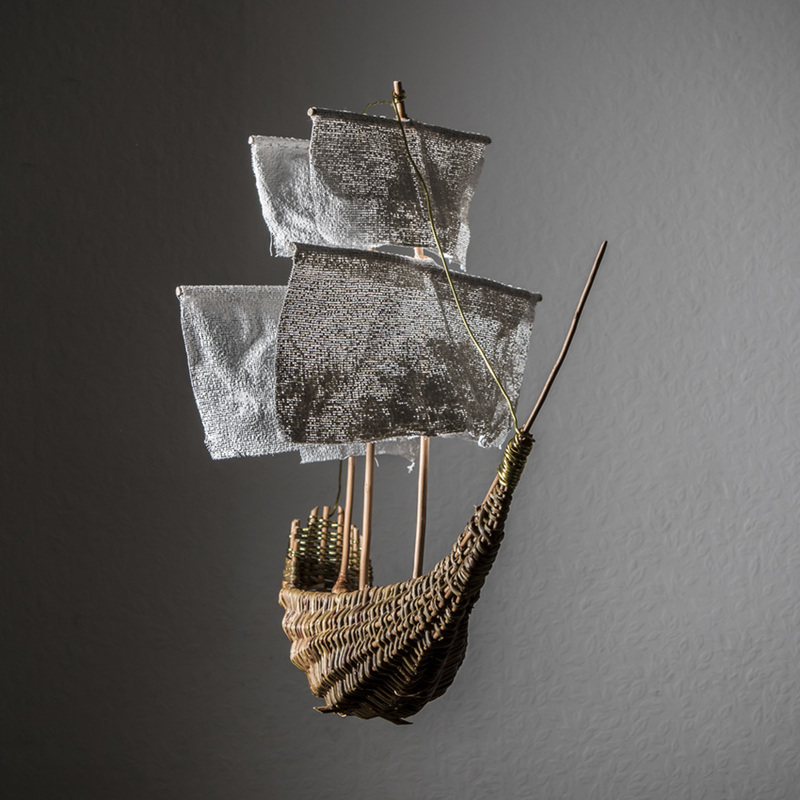 Janis Goodman
Janis's etchings are influenced directly and indirectly by a number of poems, below is an extract from A Great Scarf Of Birds by John Updike...

As if out of the Bible
or science fiction, a cloud appeared, a cloud of dots
like iron filings which a magnet
underneath the paper undulates.
It dartingly darkened in spots,
paled, pulsed compressed, distended, yet held an identity firm: a flock
of starlings, as much one thing as a rock.
One will moved above the trees
the liquid and hesitant drift.
Come nearer, it became less marvellous, more legible, and merely huge.
“I never saw so many birds!” my friend exclaimed.
We returned our eyes to the game.
Later, as Lot’s wife must have done,
in a pause of walking, not thinking of calling down a consequence,
I lazily looked around.
The rise of the fairway above us was tinted,
so evenly tinted I might not have noticed
but that at the rim of the delicate shadow the starlings were thicker and outlined the flock
as an inkstain in drying pronounces its edges.
The gradual rise of green was vastly covered;
I had thought nothing in nature could be so broad
but grass.
I watched, one bird,
prompted by accident or will to lead,
ceased resting; and, lifting in a casual billow,
the flock ascended as a lady’s scarf, (transparent, of gray, might be twitched
by one corner, drawn upward and then,
decided against, negligently tossed toward a chair: the southward cloud withdrew into the air.
​

​Teresa Winchester
Teresa takes inspiration for her bold linocuts from many stories and poems - below you can see the owl and the pussy cat...
Here's an extract from the 1st verse (by Edward Lear)

The Owl and the Pussy-cat went to sea
In a beautiful pea-green boat,
They took some honey, and plenty of money,
Wrapped up in a five-pound note.

Joan Newall
As well as making books Joan writes poetry and these are the inspiration for her work for this exhibition, delicate and dark they complement each other perfectly.
Rima Staines
Rima's beautiful ink illustrations accompany the amazing poem Sometimes A Wild God by Tom Hirons below is a short extract. The beautiful tiny books of this illustrated poem will be available at the exhibition as well as some of the original illustrations.
​
Sometimes a wild god comes to the table.
He is awkward and does not know the ways
Of porcelain, of fork and mustard and silver.
His voice makes vinegar from wine.When the wild god arrives at the door,
You will probably fear him.
He reminds you of something dark
That you might have dreamt,
Or the secret you do not wish to be shared.


Rima Staines is an artist using paint, wood, word, music, animation, clock-making, puppetry and story to attempt to build a gate through the hedge that grows along the boundary between this world and that. Her gate-building has been a lifelong pursuit, and she hopes to have perhaps propped aside even one spiked loop of bramble (leaving a chink just big enough for a mud-kneeling, trusting eye to glimpse the beauty there beyond), before she goes through herself.
Rima was born in London in 1979 to a family of artists and has always been stubborn about living the things that make her heart sing. She lives and travels with, Tom Hirons (a writer, storyteller, acupuncturist, poet & wilderness rites of passage guide), and their young son, in Hedgespoken - a vehicle for the imagination - a travelling offgrid home and theatre built on a 1966 Bedford truck.
Rima's artwork has appeared in and on books, magazines, and record covers on both sides of the Atlantic. She maintains a passionately-followed blog at intothehermitage.blogspot.com and has sold paintings and prints of her work (as well as the clocks she makes) in her travels the length and breadth of Britain. Her work hangs on walls in six of the seven continents.
A former accordionista with the London Gypsy Orchestra, she can now be found playing by Devon’s street corners and campfires, and giving life to puppets on the edges of woods. She has books in the making, and also produces animations and puppets and obscure games in lost dialects.
Rima’s inspirations include the world and language of folktale; the faces of the people who pass her on the street; the folk music and art of Old Europe and beyond; peasant and nomadic living; magics of every feather; wilderness and plant-lore; the margins of thought, experience, community and spirituality; and the beauty there is to be found in otherness.